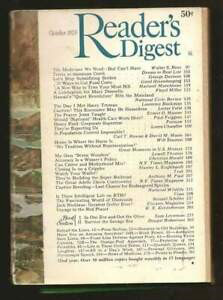 When I was a child, almost every home had a Reader’s Digest in the house. Most people I knew kept the small little magazine in their one bathroom. That worked great because you could usually “digest” the abbreviated articles while doing bathroom business. My favorite feature was called “The Most Unforgettable Character I Ever Met.”

Writers recalled unique individuals who stood out because they followed the beat of a different drummer. They seemed to be unbothered about what others thought of their unconventional behavior. In a world of circles, they were rectangles. Sadly, I don’t remember any specific characters, but I do know that I eagerly awaited each month’s Reader Digest so I could read this section. Sometimes the individual was someone who went out of their way to help someone or make them feel special. Sometimes the person possessed a humorous characteristic, had unique habits, clothes or speech patterns. The writers always held up these people as admirable because they added bright color to ordinary life.

As I began to write String Too Short to Tie, I realized that without some gentle humor, my book would be a real downer. Besides that, I wanted to show readers the rich humanity of the people of my hometown. There were so many unique individuals that I knew growing up, and I wanted to highlight how they contributed so much to the region’s character.

This leads me to the reason I am explaining all this. So many people have messaged or texted me that they were trying to figure out who the characters really are. In other words, who was the actual person behind the made-up name. Granted, I did think of real people I know, or knew as a child, as I wrote the book. However, their personalities were exaggerated as a way of showing a more stereotypical portrait of my hometown since I wanted to accentuate their colorful characteristics. This is true of the Class of ’63 and especially the person I call “Carla.”

As a character in a memoir, Carla is a composite of many people, but represents the spirit of the place. She is unconventional, generous, opinionated, kind, ordinary, exceptional, accepting, creative and optimistic. She marches to the beat of her own drummer like so many people I knew growing up in that part of the country. In many ways she represents a colorful light, shining bright against the stark landscape of the plains, dancing in the dark.